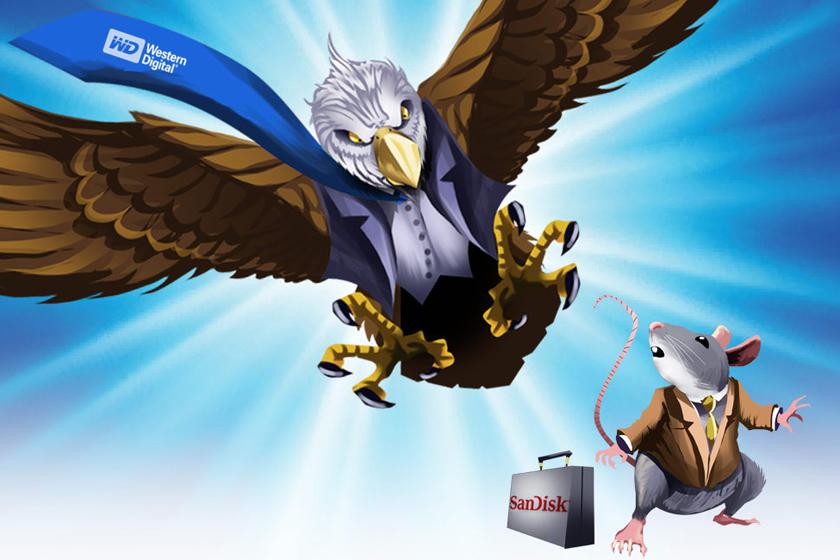 The other day, gossip about the possible merger of two giants in their areas: one of the largest manufacturers of Western Digital hard drives and no less popular manufacturer of Sandisk Flash drives. It was said that negotiations are already at the final stage. Now Western Digital has officially announced that Sandisk is buying. The total transaction amount is $ 86.50 per share. It seems that WD plans to enter the market of flash drives and SSD.

There were rumors that Micron also showed interest in Sandisk, but it seems that these were only rumors, or the Western Digital proposal was more interesting. It is interesting that Sandisk is tightly cooperating with a competitor of WD on a hard drive, Toshiba, but it seems that the deal will not affect their joint production in any way. Such transactions are not made instantly and this is planned to be completed by the third quarter of next year.

The combination is the next step in the transformation of Western Digital into a storage solutions company with global scale, extensive product and technology assets, and deep expertise in non-volatile memory (NVM). With this Transaction, Western Digital Will Double Its Addressable Market and Expand Its Particupation in Higher-Growth Segments. Sandisk Brings A 27-Year History of Innovation and Expertise in NVM, Systems Solutions and Manoufacturing. The Combination Also Enables Western Digital to Vertically Integrate Into Nand, Security Long-Term Access to Solid State Technology at Lower Cost.

The Proposed Combination Creates Significant Value for Both Sandisk and Western Digital Shareholders. Western Digital Brings a Successful Track Record of M&A with a number of acquisitions over the Last Several Years Helping to Fuel Innovation, Create Value and Strongly Position The Company to Capture Higher-Grown Opportunitities. In addition, Western Digital’s operational excellence, coupled with the recently announced decision by China’s Ministry of Commerce (MOFCOM) allowing Western Digital to integrate substantial portions of its WD and HGST businesses, is expected to generate additional cost synergies.

“This transformational acquisition aligns with our long-term strategy to be an innovative leader in the storage industry by providing compelling, high-quality products with leading technology,” said Steve Milligan, chief executive officer, Western Digital. “The Compined Company Will Be Ideally Positioned to Capture The Growth Opportinites Created by the Rapidly Evolving Storagege Industry. I’M Excited to WelCome the Sandisk Team as We Look to Create Additional for All of Oour StakeHolders, Including Oour Customers, Sharreholders and Employees.”

Western Digital and SanDisk’s complementary product lines, including hard disk drives (“HDDs”), solid-state drives (“SSDs”), cloud datacenter storage solutions and flash storage solutions, will provide the foundation for a broader set of products and technologies from Consumer to Datacenter. Both Companies have Strong R&D and Engineering Capabilites and A Rich Base of Fundamental Technologies with 15,000 Combined Patents IsSood or Pending Worldwide.

TOSHIBA HAS Been A Long-Term Strategic Partner to Sandisk for 15 Years. The Joint Venture (JV) with Toshiba Will BE Ongoing, Enabling Vertical Integration Through A Technology Partnership Driven by Deep Collaboration Across Design and Proecess Capabilites. The JV Provides Stable Nand Supply at Scale Through A Time-Tested Business Model and Extends Across NVM Technologies Such As 3D Nand Nand Nand.

Steve Milligan Will Continue to SERVE as Chief Executive Officer of the Compined Company, and the Company Will Remain Headquartered in Irvine, California. Upon Closing, Sanjay Mehrotra Is Expicted to Join the Western Digital Board of Directors.

LED by ASONED Management Team, Western Digital Has a Strong Track Record of Integrations to Create Value. The Company Expects to Achieva Full annual Run-Rate Synergies of $ 500 Million Within 18 Months Post-Closing. The Transaction is Expieded to Be Eps Accretive on a Non-Gaap Basis Within 12 Months of the Transaction Close. Pending the Closing of the Transaction, Western Digital Expects to Continue Paying Its Quarterly Dividend and Plans to Suspend Its Share Buyback Program.

The Transaction Will Be Finance by A Mix of Cash, New Debt Financing and Western Digital Stock. In Connection with the Transaction, Western Digital Expects to Enter Inter Into Debt Facilits Totaling $ 18.4 Billion, Including a $ 1.0 Billion Revoling Credit Facility. The Proceds from the New Debt Facilities Are Expected to Be Used to Pay Part of the Purchase Price, Refinance Existing Debt of Western Digital and Sandisk and Pay Transaction Fexation Andes. IF Sandisk Cash Balance Falls Below Certain Thresholds at the Time of Transaction Close, The Merger Agreements for an Adjustment to the Mix of Cash and Stock Consideration.

The transaction is subject to approval by SanDisk shareholders and, in the event that the Unisplendor transaction does not close, Western Digital shareholders, receipt of regulatory approvals and other customary closing conditions. The Transaction is Expected to Close in the Third Calendar Quarter of 2016.