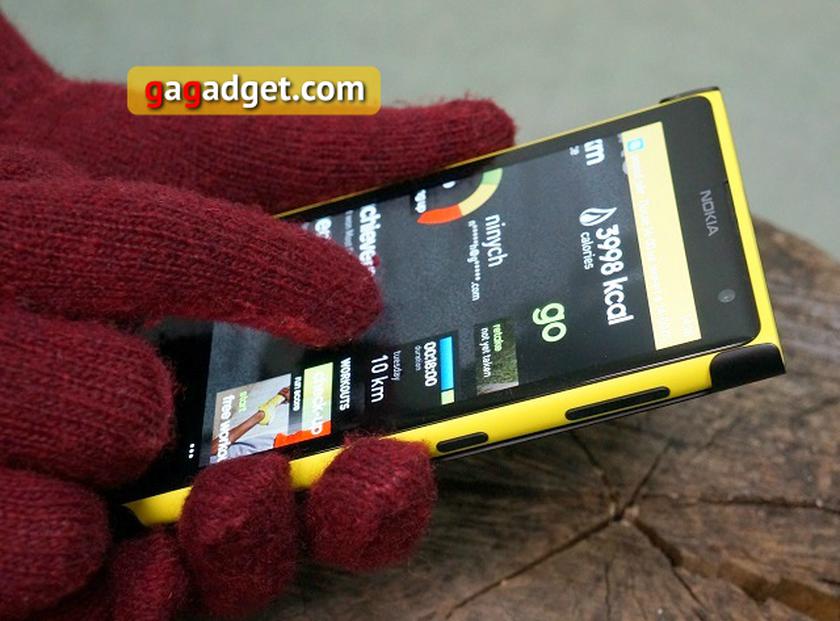 Before the start of this project, I first made sure that the application store has the necessary minimum for “moving” with Android, including Micoach. I usually run with him. I will miss the description of the differences of versions for Android and Windows Phone 8. I will only say that in the second case the application turned out to be more pretty, thought out and convenient to save and view the details of the training without connecting to the Internet. There are no problems with data synchronization. But the team that was engaged in translation into Russian, I hope, was fired without days off for hack. Micoach interface had to switch to English. The first pleasant discovery is Nokia Lumia 1020 sitting satellites in a matter of seconds even with a “cold start”. I never had to cook near the entrance in the cold in anticipation of installing communication with satellites to start training. Second. Since the smartphone screen supports the work in gloves in order to, for example, switch a boring music track or pause the application at a traffic light, you do not need to bother for a long time. These two little things make Nokia Lumia 1020 a good choice for open -air running fans at any time. A spoon of tar – a player in third -party applications such as Micoach does not pull up automatic playlists (according to an album or performer) and, in principle, does not allow us to launch music through the application. Playlist for Micoach should be created on the computer in advance. And recall this before going to run.

From sports applications in Marketplace, you can also find Nike+ Kinect Training, Endomondo and Runastic (paid and free version) and many small little -known options. This is enough for lovers, but those who travel around the world from the marathon to the marathon will be saddened by the lack of competition applications for this platform.