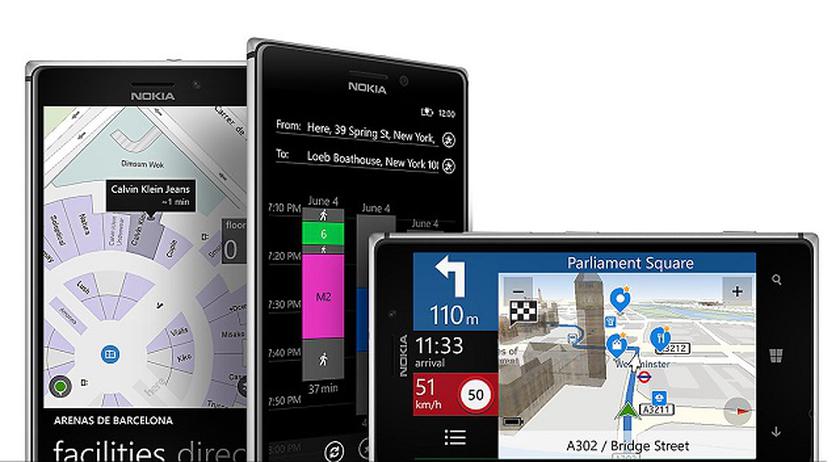 Nokia smartphones were notable for their own free OVI cartographic application before Windows Phone and Nokia participation in this project. The company transferred its experience in the field of navigation to the new operating system in the form of applications of the geolocation platform of Here. Today, the owner of the Nokia Lumia 1020 smartphone “out of the box” receives Here Drive+, Here Maps and Here Transit. Here Maps is the main application for interaction with what surrounds the user, that is, searching for himself on the map and interesting places around. In Here Maps, you can lay routes in three ways. Pedestrian are laid right there, in Maps. For automobile, the user goes to Here Drive/Here Drive+, and to search for a road by public transport – in Here Transit, which is “signed” even with train, ferries, high -speed trains, buses and lifts, about how! (I believe that for the most part these data will come in handy outside our country).

Here Maps generally copes well with its task, very quickly searches for the user’s location (I have already praised Nokia Lumia 1020 for the speed of communication with the satellites), correctly monitors it and quickly responds to all changes. However, when laying routes to the outskirts of the city, the application sometimes likes to cover, and instead of a simple city minibus or speed tram (there is such in Kyiv who does not know), offer an electric train with a transplant. This is because in our country, route taxis are actively developed, the work schedule of which exists, in my opinion, only in the head of the employees of the service. But in Europe, the States and other developed places of the globe, the laying of public transport routes should take place correctly. I was also embarrassed by the fact that part of the toponyms on the maps of Here (in the city of Kyiv, where I am physically) – in Ukrainian, and part – in Russian. Because of this, difficulties periodically arise with the search for places, which are called differently in two languages. The Here Transit application is available in more than 740 cities and free for the USA, Great Britain, Canada, Mexico, France, Spain, Italy and Germany (according to the application page in the store, it is surprisingly, there is no Ukraine on the list, although in our country it is actually in our country works). HERE MAPS and HERE DRIVE/HeREE DRIVE+ with autonomous cards (that is, they need to be downloaded once in memory of the smartphone and then can be used without Internet access) is available for 95 states. This means that it will be easier for travelers with Nokia Lumia in your pocket in a unfamiliar country and will not have to look for useful applications for tourists on the outskirts.

An alternative to Nokia navigation applications on Lumia 1020 can be Yandex services: cards and navigator if you are already used to using them on other platforms. Official applications are available in Marketplace. They also allow the use of cards loaded in memory of the smartphone, they are well “guided” in Ukraine. In particular, in my opinion, Yandex copes better with laying routes by public transport (at least in Kyiv), is well looking for all sorts of POI and useful places. But there will be little use abroad, in Yandex.Maps are 300 cities of Russia, Ukraine, Belarus, Kazakhstan and Turkey.