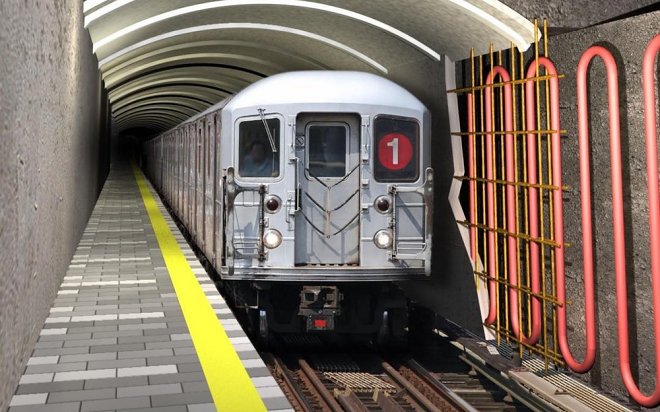 Swiss engineers proposed integrating into the metro tunnels under construction in Lausanne the system of excessive heat that they have developed. It is no secret that the subway is constantly overheated due to movements of trains, the work of many mechanisms, the presence of a huge mass of people. Previously, the task of analyzing all this heat generation was considered too complicated, but now a model has been created, which will allow the use of thermal energy with benefit.

The idea is quite simple – instead of energy costs for powerful ventilation and air conditioners in the subway, immediately remove excess heat from the tunnels out. It is only necessary that lay in the walls of the pipe structures with the coolant, at least ordinary water. She will receive heat from heated air in the tunnels, and transfer it to where it is required. In this case, directly to the surface, to nearby buildings.

In winter, cold water is pumped underground, which passively heats up to the level when it can be supplied to the heating radiators of residential premises. In the summer, on the contrary, with the help of a similar system, excessive heat can be removed from buildings and dissipate it in the thickness of the Earth. Swiss engineers calculated that in the case of the designed metro in Lausanne, you can build a system that will take heat from 60,000 kV.m. Tunnel surface areas and heat it with 1,500 apartments area up to 80 square meters.m. Each.

The main advantage of this technology for the city is total energy savings. And on the heating of housing, and on the ventilation of the metro, and on cooling communications in the summer, and on the work of air purification systems. It is estimated that the refusal of gas heating will reduce the level of CO2 emissions by 2 million. tons per year. At the same time, the construction will not require large expenses, the service life of the entire system will be about 100 years, and the most vulnerable place is thermal pumps that will have to be changed every 20 years, no more often.